Juneteenth is right around the corner. But, with their tasteless ‘Juneteenth red velvet and cheesecake ice cream,’ and ‘It’s the Freedom for Me’ napkins and plates and panned corporate Juneteenth paraphernalia, companies like Walmart were dragged on social media.

“Corporate America has found a way to commercialize the emancipation of enslaved people,” wrote Jezebel.com’s Khalisa Rae. “America loves to co-opt a revolution and sell it back to people like they’re doing us a favor.”

“Those people who do not have that lineage…do your homework, and learn more about it!” diversity coach Kim Crowder told the Amsterdam News. The founder and CEO of the consulting firm with the same name continued that Walmart can not expect to do a ‘Juneteeth ice cream,’ ‘It’s the Freedom for me,’ brand, nor the Indiana Children’s Museum do a Juneteenth watermelon salad, and not expect a Blacklash, and the economic consequences—like the withdrawal of expected financial compensation as folk decry the tone-death marketing ploy.

“My hope is that for those of us who have that lineage that we ourselves would decide what feels like liberation for us, and we celebrate based on that.”

From appearances on platforms like Fox Soul and CNN, Kim Crowder Consulting’s founder and CEO is known as “one of the country’s leading anti-racism, diversity, equity, and inclusion speakers,” coaches and trainers.

Crowder told the Amsterdam News that it should be culture, community economics, equity and inclusion that should take center stage, and not raw gravalicious capitalism. Big box retailers like Walmart, ShopRite, and institutions like Indiana’s Children Museum should come from behind exploitative marketing ploys, and give back to the communities which have historically been underserved, discriminated against, and for whom Juneteenth marks a painful period in history with on-going consequences.

It is a day to “commemorate the emancipation of enslaved people in the U.S.,” says Crowder. Not one to make a fast, and offensively-gained buck.

On Monday, June 20, Black people—nationally and also worldwide—will commemorate Juneteenth, the 158th anniversary of the end of official slavery in Galveston, Texas.

The traditional story runs with that Tarzan-like narrative that it was white Union Army General Gordon Granger who got to Galveston on June 19, 1865, and informed the 250,000 enslaved men, women and children that the Civil War was over and that President Abraham Lincoln had issued an Emancipation Proclamation (later the the 13th Amendment) officially outlawing slavery on Jan. 1, 1863, freeing them two years prior. But, according to another version, it was Black union soldiers who told Black folk in Galveston the news. The Juneteenth Legacy Project said, “Organizations such as the Juneteenth National Observance Foundation have uncovered a little-known element of that narrative: the presence of several Union regiments of the U.S. Colored Troops (USCT) that, by coincidence, marched into Galveston at the same time as Granger. These actions provided a powerful image to the island’s enslaved people, who were oblivious to the fact that they had been granted freedom by Lincoln two years prior.”

“We know slavery did continue to take place after that,” said Crowder, and while many immediately packed up and headed north and to other parts of the nation, others stayed working on the plantation, share-cropping, and providing for their families the best way they could.

“For years after that it was a holiday where they got dressed up. There’s beautiful images from back then, but if you fast forward…the truth of the matter is that none of us, particularly young people, have really learned the full gambit of United States history, and so this conversation about Juneteenth started happening a few years ago.” The Houston, Texas native learnt about the holiday when she was young, she said, but so many of her peers and the younger generations have not.

“Even those above who are descendants of enslaved people have not learned about Juneteenth.

“It came as a surprise to so many people, and so now we are at this juncture where Black people —in particular Black people who have enslaved ancestors—are figuring out how to celebrate this. Culturally what does that celebration look like, and now companies are starting to adopt the idea of celebration.”

The solution is simple, said Crowder, “For those of us who have ancestors who were enslaved in the United States, then we get to decide how everyone celebrates it. A day off is appropriate right? If we choose to do nothing, if we choose to have a barbecue—that  is absolutely ours to own.”

The challenge, she said, is that federal holidays become “commodified. Look at Cinco de Mayo. People don’t even know what it is about, but they show up and eat a taco. And so my hope is that for those of us who have that lineage that we ourselves would decide what feels like libration for us, and we celebrate based on that. For people who do not have that lineage, my recommendation is to do your homework and to learn more about it.

And what about companies and employers?

“We talk about workplaces and how they have been crappy celebrating it. Often times they want to quarantine the message as when finally folks who were slaves were freed. And what I encourage workplaces to do is instead to look at the impact of folks who have that lineage on business, on the world in general, and take that out broader because often times they are not elevating leaders who are Black…and they look at ways that they can advocate for Black workers in those industries.”

When companies see the date coming up and want to be down and make a buck, Crowder responded, “Don’t try and make a dollar.”

But, they’ll say that they are a business.

“Then put that money into the communities that are directly impacted by it. Move forward and highlight those folks in the front. Walmart did have a Black woman who had created that flavor. Why didn’t they choose to highlight her? Why make a [tag] that says ‘It’s the freedom for me’?

And what’s interesting with the Children’s Museum in Indianapolis is that they took that and basically blamed it on the employee who came up with the idea, instead of owning it. And that’s where I kind of paused in seeing organizations sort of leaning on the community that are directly impacted most, in the way of saying ‘OK great, if this goes wrong we’re gonna blame you for it.’ Why come up with something new during that time of year for the organization itself to make a dollar?

“Why aren’t those organizations looking for ways to directly impact communities, impact Black-owned businesses during that time period? To me, moving that wealth over is absolutely a direct and appropriate through-line considering what enslaved folks went through and what that meant for their families; the lack of economic wealth, the labor that was used and exploited. So, we’re just talking about the ways that capitalism shows up, and so if an organization is trying to self-correct or to change the battle norm, then what they should be doing is looking for opportunities for folk where it already exists, and creating opportunities for folks who don’t have the space to do so.”

And then there are the companies which have directly benefited, even had their beginnings from enslavement—that old money, as brought up during the 2005 “Slavery in New York” New York Historical Society exhibition.

“There is the actual through-line,” Crowder said. “This is what this looks like in 2022. Organizations can sort of scapegoat by saying, ‘Oh, look we’re highlighting it and not taking accountability.”

A major thing they can do, Crowder said, is to “create a plan to make it right. Reconciliation is often a part of the conversation that does not get spoken about, because that’s dirty right? Organizations don’t want to touch that—that could mean exposure. And it would mean that they might have to undo quite a bit and even our country doesn’t want to do that level of work.

Organizations and companies are being held accountable, the much-sought-after consultant said, “Once you start talking about race, people don’t want to put their hands up…look into pay equity for your organization. Are you paying Black and Brown…enough. What is your retention rate for those who have been historically racialized? And when you add intersectionality, when you add people with disabilities, when you look at age, you know the protected classes…what are you doing to make sure that they are being equitably treated within this organization.”

Those are the conversations that “we should be continuously having; cultural improvement, organizational change. Diversity, inclusion and equity. It’s workplace culture. It’s organizational structure. It’s part of everything that you do. It’s the way you market, and message, and communicate with audiences.

“Are your prices higher and in certain communities that specifically don’t have the money to pay those prices? We are thinking about it at that level. We’re talking about accountability and organizations having a moral compass. Maybe that’s asking too much. You’re talking about capitalism, you’re talking about money. It’s almost a direct conflict. I don’t want to say always, but it can be.”

Juneteenth, as all cultural holidays—like Dr. Martin Luther King’s January 15th day of recognition—should be celebrated in the way those affected decide. Communities are now fully aware that businesses, unscrupulous or not, will always look for an angle 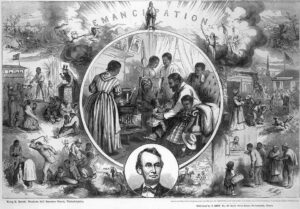 The Journey to Juneteenth: The Complicated History of Emancipation